Posted on October 31, 2012 by krista in Adventure Challenge!

Last week’s Adventure Challenge was about living with open mind and being willing to try new things even when you never would’ve expected them. Basically, the challenge was to say, “YES!” instead of making excuses all the time.

One of the people we met this summer is really living that out! We were even able to interview him and tell his story here, on our blog.

Rick is in his forties and hadn’t been in a race for a long time. When a friend suggested racing in the Iceman Cometh Challenge, a mountain bike race, Rick didn’t use his age or current level of fitness as excuses. Even though he never thought he’d pick up his old hobby again, Rick started training just last year. Since then, he’s been in several other races and is now getting ready to reach his goal and ride in the Iceman Cometh Challenge this weekend! We think that’s way cool and are so excited for him!

I’m sure Rick would’ve never seen himself at this point just a couple of years ago. He made the decision to try something new and that decision has effected his life in multiple rewarding ways. 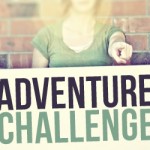 p.s. Are you up to the challenge of living with a mindset of adventure? Check out this week’s Adventure Challenge!

Hey There! I'm Krista - a little crazy, mostly creative, and sorta adventurous. I love discovering new things and creating beautiful things! I want to live my life in a way that inspires, matters, encourages, and rocks!
View all posts by krista →
← Are You Living An Uncommon Life?
When It Seems Like You’ve Lost Your Dream →