hanging out in the thumb

Posted on July 30, 2012 by KI Admin in behind the scenes, BlankCanvas™ tour

The goal is to be posting here every day, and now that WE’RE OFFICIALLY ACTUALLY ON TOUR with no more backtracking back home, that’s what we’re going to do! (barring lack of internet connection, of course) So yes, we are about 4 days behind with vlogs now and I’ll hopefully remedy that today, though the connection where we’re staying is pretty slow for uploading. 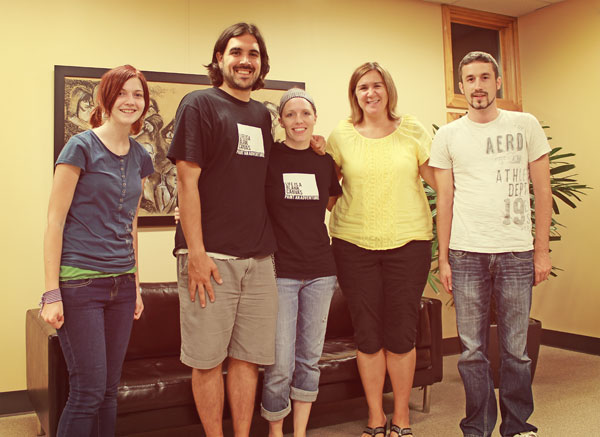 (us with Tammy, our wonderful interview coordinator in Chicago!)

We were in Chicago with the Jesus People until Friday morning and then hurried home to pick up the real van. The “hurry” turned into not actually getting to our house until 9:30pm… we had a little side trip to the dr with Maeve because she hadn’t been acting like herself and we suspected she had strep. A quick test revealed that we were right. So obviously we had to get antibiotics, then picking up and transferring stuff to the other van, cleaning out the one we’d borrowed for the week, and stopping at my parents for supper which always takes a while somehow 🙂

On Saturday morning we managed to scurry around in our house and leave there by noon. Was it all clean? Sadly, no. But oh well I guess.

So now we’re here in Michigan trying to get caught up. Poor Krista is about 12 interviews behind on editing. I’d like to see us putting out two per week, but it remains to be seen if that’s going to be possible. I think she has our other two Milwaukee interviews about ready to post, and I think it’s definitely going to get better as we have been refining out processes. We kept being distracted by preparing for being actually gone from home, so now that we are I have high hopes we’ll be more efficient!

David almost has the financial spreadsheet done so that everyone can see exactly how funds are being used. We were very blessed to almost meet our initial goal with basic funding before this leg of the trip, but of course we’ve had a few non-basic expenses we’ve had to take care of already, namely paying for half of the new transmission for the van. So you’ll be able to see how all of that shakes down. Thanks for all of your support so far!

Here is last Wednesday’s vlog, complete with getting locked out,
a dreaded blue screen, tickets, and a play!

we're a passionately creative multicultural family, self-employed and location independent, and we're on a mission to inspire people to go after their dreams.
View all posts by KI Admin →
← out and about in Chicago
BCT Interviews Explained →