with a mindset of adventure

Posted on August 19, 2012 by KI Admin in behind the scenes, BlankCanvas™ tour, inspire

We have had quite a few little adventures in the week or two, most of which are still waiting to be revealed in upcoming vlogs. The two most notable moments were in NYC and several days later in DC. We don’t want to spoil the vlogs… but let’s just say that we really had to choose to look at them as adventures, because in the moment we could have lost it a little bit.

Life is full of stories and we want to hear yours! One of our goals is to encourage people to live with a mindset of adventure. With that in mind we want to start putting out a new challenge every week – something simple that you can do and share in a weekly linkup in conjunction with the new interview we put out for that week.

The challenge for the week is just a prompt, you can link up any story with an adventure twist you want. Are you doing something out of your comfort zone? Are you pursuing something? How are you living life on purpose and not just letting it pass you by? Maybe it looks like something that went wrong but you chose to view it as an adventure instead of letting it get you down.

Whether it’s an adventure that happened in the past, one you’re right in the middle of, or one you want to start, we want to hear from you!

Real stories from real people are powerful and meaningful. Here’s your chance to use your story to inspire to others! Each week we’ll pick one story to feature here.

The first challenge is to do something that makes you feel young. What does that look like to you? Come back on Wednesday to link up something you’ve done before or something you do between now and then 🙂 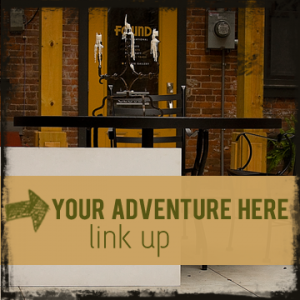 Now, let’s go back to PA where we had something unusual for breakfast!

And the next day we traveled to NYC!

are you a fighter?

This song fits well with what we’re about here.